MINPMEESA > News > THE SECOND PHASE OF THE KAIZEN PROJECT KICKS OFF

The Minister of Small and Medium-Sized Enterprises, Social Economy and Handicrafts officially launched the 2nd phase of the KAIZEN Project during the Conjoint Coordination Committee session that took place on the 27th of February 2019 at the Yaounde Emergence building.

In the presence of his Excellency the Ambassador of the Japanese Embassy to Cameroon, the Director General of the Agency for the Promotion of Small and Medium-Sized Enterprises, the resident representative of JICA to Cameroon and other Japanese experts, Minister Achille BASSILEKIN III expressed his gratitude to the Japanese government for the fruitful cooperation between both structures so far while expressing the high expectations of MINPMEESA with regards to the 2nd phase of the project given that the strategies acquired during the first phase helped in enlarging the roadmap, productivity and has ameliorated the services offered by many SMEs. 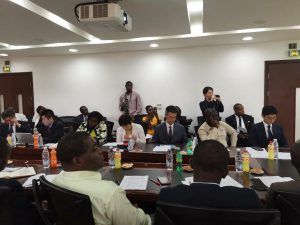 The Japanese Ambassador to Cameroon on his part also thanked the Camerooniangovernment for a fruitful cooperation while wishing that the 2nd phase of the KAIZEN project registers a huge success. He laid emphasis on the fact that the KAIZEN project aims at ameliorating the quality and productivity of SMEs given that this sector is one of the main engines of the CEMAC economy.

Following both presentations of the second phase of the project and the chronology of training and business support services for the year 2019-2022 presented by KAIZEN Experts as well as points of discussion that were raised by the Japanese delegation, the following resolutions were made: besides Yaounde, Douala, Bafoussam and Kribi, the fifth region that was yet to be determined for the project will be made known before the end of the year. As regard the choice of the 75 enterprises to take part in this project, the Minister recommended that the ministry should be used as a laboratory for this project. He called on professional enterprises to be very much involved in the exercises that will be carried out while respecting selection criteria.

On the 3rd point on the sharing of media coverage cost, it was recommended that the mainstream media should be used. Relative to the fourth point on the selection of candidates for the KAIZEN guide, it was recommended that the reflection on the profile and number of personnel from MINPMEESA and the Agency for SMEs (APME) should be prolonged. As regards the fifth point on the inclusion of the KAIZEN concept in the Cameroon Development Strategy Paper, the Secretary General of MINPMEESA made it clear that the process started in 2018 and will continue. However, a document will be handed to MINEPAT by a representative of MINPMEESA during a workshop that will take place in Ebolowa from the 4-8 March 2019.

All in all, the Minister opted to engage himself to continue negotiations so as to come to an accord with the cost that will be covered by the Japanese delegation while reaffirming his continuous efforts in carrying out the KAIZEN Project.

It should be noted that a KAIZEN award has being scheduled for the year 2022.